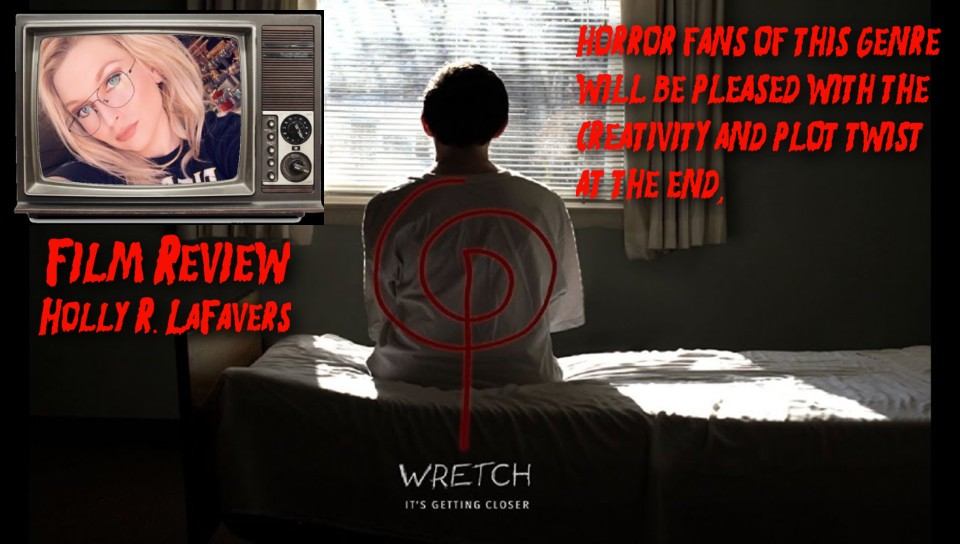 WRETCH is a psychological horror film produced by Thoughfly Films in Louisville, Kentucky. This film horror film is about a drug-induced night that takes place in the woods, where three friends are confronted with themes of jealousy, guilt, fear, sexual desires, and a luring supernatural presence that begins to haunt them throughout the movie. Credits for this film include a written and directed screenplay by Brian Cunningham, production by Nic Brown, Janel Nash, and Brian Cunningham, and starring Spencer Korcz, Megan Massie, and Riker Hill.

If you are a fan of psychological horror, I guarantee that you like enjoy this film from start to finish.

The first five minutes of the movie lures you in with two of the main roles Abby and Caleb standing outside in darkness, Abby with blood covered mouth and shirt, Caleb questioning her…what in the hell happened…uhhh how did she get outside in that situation….etc. The movie takes a plot twist in the first half with it being filmed in a hidden footage or documentary style perspective, and then later switches to a long shot view in the latter half. Abby, Caleb, and Riker are introduced early on as main and supporting actors, as well as a luring, tall, mythical monster that plays the antagonist though out the film.

Wretch contains themes that I enjoy from a good psychological horror film like sex, drugs, and mental instability. Abby, played by Megan Massie, starts to develop bizarre symptoms and behaviors that disturb her sleep, enter her home, and follow her, as she starts drawing this swirly red symbol with methodic glazed over eyes. Caleb, her boyfriend, played by Spencer Korcz, becomes confused, jealous, and hurt throughout the film when he recognizes a connection between Riker, their pothead friend, played by Riker Hill. Wretch peeks more of the audiences’ interest during the second half of the film because horror elements (like blood & gore) are introduced as the story between the friends unfold.

In conclusion, I really enjoyed Wretch, and I would give it comparable references to other horror films like “Slenderman”, “It Follows”, and “The Villiage”. I believe that Kentucky fans will appreciate the fact that the entire movie was filmed in the state, using locations at may be familiar to those living in or near Louisville. I also believe that horror fans of this genre will be pleased with the creativity and plot twist at the end, which is figuring out what the monster or this supernatural creature is and/or means.

I suggest you give it a go and support indie horror!!!! Just keep note that I would not recommend under 18 to watch, as it contains adult themes and nudity.