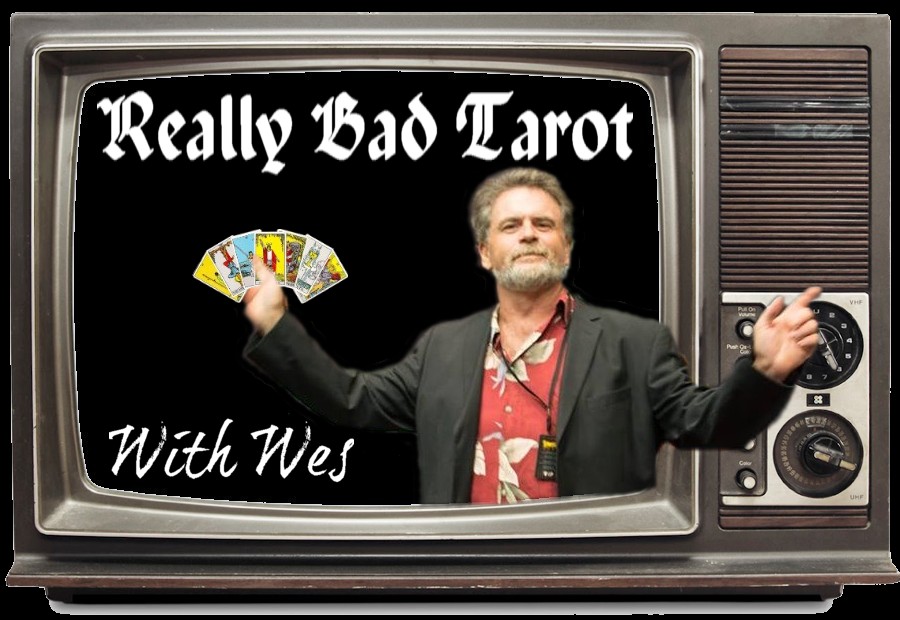 What is Bad Tarot Reading? 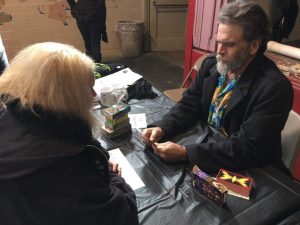 A quick history: My friend and co-host Ken Boggle used to do a weekly Tarot card reading for the masses via Facebook. One week he was out of town or something and I, for no particular reason other than wanting attention, said I would step into his shoes and do a Really Bad Tarot Reading and post it on Facebook.

Understand that while I collect Tarot decks, I’ve never done the homework to do a proper Tarot reading. On the rare occasions I actually took them out of their packages, I mostly used them for my own meditations or day to day mundane guidance.

I believe in the power that we give the cards. Once I asked one of my Oracle decks what I should concentrate on for the day and the Romance card came up. It was my wedding anniversary and I had forgotten! I might have remembered by my second or third cup of coffee…but who knows.

Anyhow…that first Bad Tarot Reading was very well received. What I loved most was that many of the messages I was getting were from actual, professional Tarot card readers and psychics telling me what a fantastic job I had done creating a humorous advice column just from the interpretation of the art work.

However…some people expressed concern that I was making fun of Tarot readers. One lady said essentially that although I may not mean any harm, Tarot reading is best left to professionals. For a long time I decided that maybe doing them was selfish and I should not take a chance on either hurting someone’s feelings or belittling something that I enjoy so much.

But the requests for more Bad Tarot Readings kept coming in. 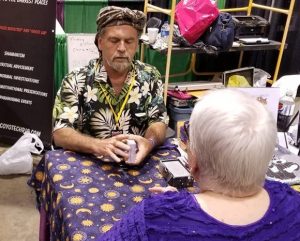 Finally, one weekend I happened to be at a rather poorly attended paranormal convention. There was no way I was going to sell enough T-shirts to make my expenses. Having several of my Tarot decks in my briefcase for no other good reason than the house cats don’t bother them in there, I decided to make a small sign and offer Really Bad Tarot Readings in person for a very small price – basically less than I would tip my waitress for a couple of drinks.

I made my expenses! I gave several readings – basically just going back to my original idea of looking at the pictures and making up bullshit. Almost as gratifying for an attention whore like myself, nearly everyone in the building thought my very idea (and crappy hand written sign) was hilarious.

Something else happened though. Some of my “clients” asked actual questions THAT I ANSWERED. The cards actually led me through a series of thoughts that played right into specific situations that they were experiencing. While I had trouble wrapping my head around people coming to me for advice, their responses to the readings told me I was onto something: maybe I can help people get through their problems with humor. Maybe, just maybe, the universe was trying to tell me something.

So, please understand. I really am embracing the Tarot as guidance from above. I am just assuming that God’s plan for me takes into consideration my tendency towards being a raging smart-ass and not following the norm. And of course, as I say during my face-to-face readings “I could be wrong.”(and it’s funnier with the hand gesture)

I will periodically be posting Really Bad Tarot Readings on this website. If you would like your own personal reading just find me at one of my many personal appearances during the year. Additionally, when I do conventions I sometimes am asked to do The Really Bad Tarot Gallery. In this format I give a brief history of my Tarot, give audience members readings, and usually throw in a couple of Really Bad Card Tricks for good measure.