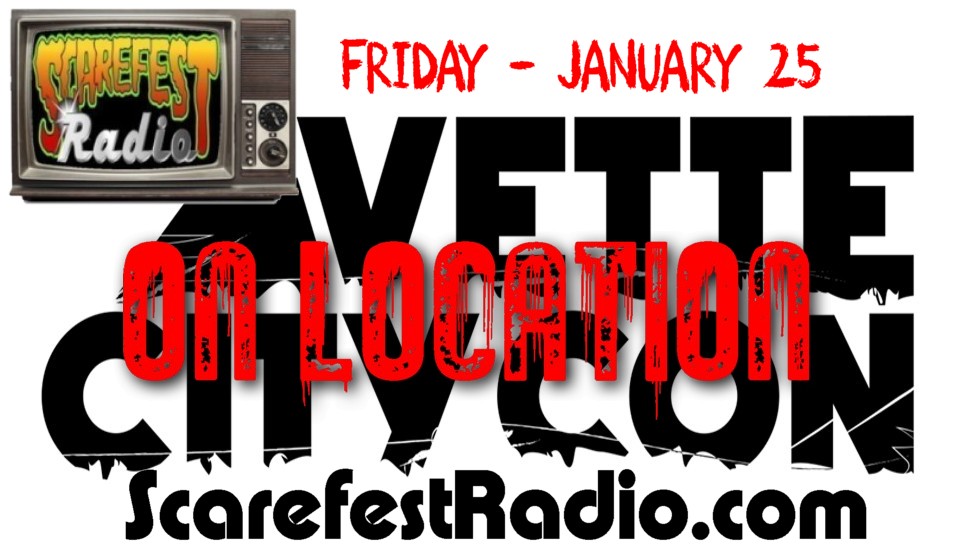 This week I’m doing something a little different: I am reviewing a horror convention.

Last weekend I went to Bowling Green Kentucky for my first visit to The Vette City Con. Vette City is small convention that caters to the horror and comicon crowds. It was nice to see horror take a front seat up against fantasy, pop culture, and sci-fi and the like.

They had a great selection of diverse vendors for the relatively small space they were in. We saw some of the most original artwork available anywhere mixed in with the usual fair of bobble heads and jewelry.

The layout was typical of small conventions: several rows of tables separated only by what the vendors packed with them. I’m not complaining about that. Had we been a little better prepared we could have set our booth up to stand out better.

The logistics of such a room do make it difficult for vendors that need electricity (i.e. a convention that features it’s own video podcast). But fortunately I tend to over-pack and with my long cord and a little bright yellow duct tape we were good to go. We are still having some problems on our end with our remote broadcasts. One computer has crapped out and the old one is too slow to process video effectively. But that is no fault of the convention. In fact, the Corvette Museum where it was held, had better than average FREE WiFi for us to use.

This was their third year. In the past the two day event was held Saturday and Sunday. We talked to the owner during the course of the weekend and he told us that he decided to try Friday instead of Sunday because…Sundays tend to suck (my words, not his).

I haven’t heard the comparative numbers. The crowd was thin Friday (always an exciting thing for a vendor to witness on the first day), but sufficient and active. I think they started earlier (2PM) than necessary especially since they didn’t bring in the celebrity guests until 4PM. I suppose it does give the vendors a little more time with their perspective clients, but we didn’t really see any activity on the floor until the guests arrived. They also let the celebrities leave at 6 and kept the con floor open until 8.

From my vantage point Saturday looked like a success. Once the celebrities joined us at noon (the expo opened at 10), they crowd stayed pretty active and steady until 6 when the celebrities left. Many stayed through the costume contest at 6PM but then the crowd quickly diminished and the vendors started packing up. We did not stick around to see if anyone held out for the 8PM closing time.

I thought I might see more cosplay since so much of the marketing and the management’s energy went into nurturing it. Possibly the scheduling of another comicon the same weekend only a couple of hours away hurt them. That being said, some of the cosplay that was there stood up to some of the best done and imaginative that I have seen anywhere.

The crowd did thin out steeply for about an hour at 4PM. This was when they did their costume pre-judging in the commons area. I didn’t go out to see exactly how they handled it, but I think it could have been handled on the stage in the convention room without much disruption. Every warm body in a room counts when you are a vendor.

On that note they did one thing very right. They held their seminars in the convention room. Despite what you might think, they caused minimal disruption to the con and kept the crowd in place. For a small convention this is very important.

Despite the scheduling glitches in my humble opinion (and they may have had good reasons for making those decisions) I think it’s got a good foundation to build on and I hope they can grow it exponentially over the next few years. The management was attentive and friendly and the vendors all acted like they had a stake in the success of the show.

For it’s size, it was very well attended and ran smoothly. I’m looking forward to going back next year.