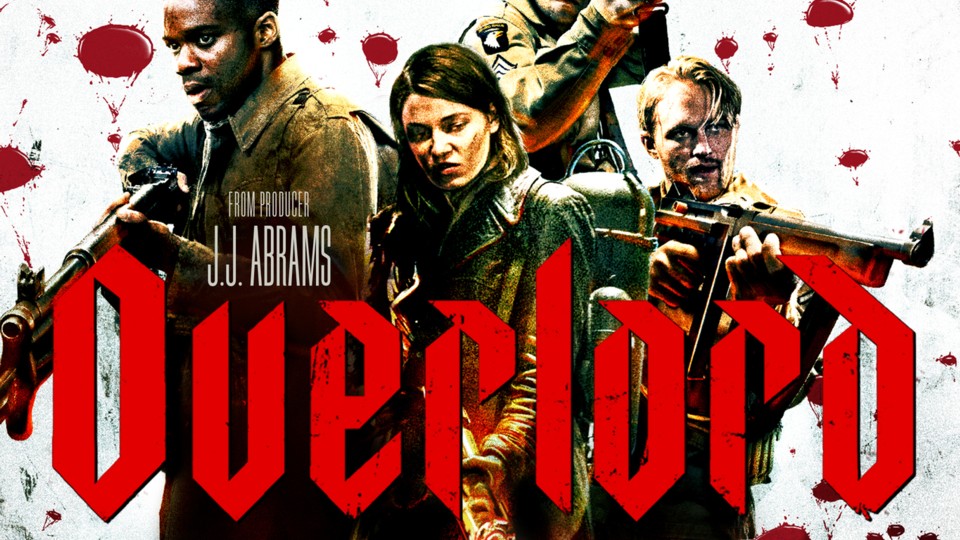 I have begun to see a pattern in my film reviews. I tend to stray more into the gimmick and/or hybrid horror genre. OVERLORD certainly lands right in that pattern, as it is as much an action film as it is a horror film.

OVERLORD tells the story of paratrooper squad during World War II that are being deployed to take out a German radio tower on the eve of D-Day. Things go south when their plane is shot down. The survivors realize they are on their own to take down the radio tower or the invasion at Normandy could be at risk. Along the way, they discover secret Nazi experiments happening in a local French village using a serum that can raise the dead and create an army of violent zombie soldiers.

Nazis creating invincible, undead super soldiers? This almost sounds familiar. Have we seen this before? It is a popular topic. There are two DEAD SNOW movies, another one called BLOOD CREEK, and a trilogy of OUTPOST films (which I haven’t seen) that all deal with the same topic. I’m sure there are others but OVERELORD is the first one I’ve seen that is entirely set during WWII.

I have to admit, I didn’t go into the movie with high expectations but I found myself liking it despite my initial doubt. So what did I like about it?

It was visually appealing and had a lot going for it in the cinematography department. Considering that they had some visual effects provided by Industrial Light and Magic, as well as several other highly respectable FX teams, the visual effects and makeup work were impressive. There is also many practical effects at work, which made the horror seem a tad more visceral.

The cast was decently good. Wyatt Russell, son of Kurt Russell, turns in a decent performance as a demolition expert and de facto leader of the group. Danish actor Pilou Asbaek, known for GAME OF THRONES, hams it up as a nasty SS captain. Jovan Adepo, who plays Private Boyce, really stood out. We experience the movie through Boyce’s eyes and Adepo gave a believable performance, which really helped to convey to the viewers the true terror he was caught up in but at the same time, I felt his character was a trope. We needed a good guy and he fit the bill but sometimes he was TOO good of a guy.

Were there things I didn’t like? Thought you’d never ask…

Even though the movie was pretty intense at times, the pacing was muddled in places. It seemed like it took a while to get to the underlying story. You have this great opening scene of the planes going down, people finding survivors, ect but the horror elements took some time to manifest. Ultimately, there was a big build up to how nasty these experiments were but the payoff seemed underwhelming. Maybe I felt the trailers hinted at more horror.

Also, without giving away spoilers, I felt like the characters did some rash and/or foolish things that were completely plot device elements. For one, there is an awful lot of shooting and screaming done for a group of people on a stealth mission. Plus, they are reckless beyond belief with a sample of the serum that they manage to get ahold of at one point. Just straight up negligent.

However, a good counterpoint is, how often do people in horror movies make consistently wise decisions?

Overall. I felt like it was lacking in the horror aspect. However, that was only one layer of the film. Even though the action sequences were decent, in the end, I felt the movie came out a middle of the road offering that was trying to be a mesh of action with horror and only succeeded reasonably at both. There was a nice offering of gore and a few obligatory jump scares but it never totally crossed into full-blown terror territory and stuck more toward action/adventure. Not necessarily a bad thing, but disappointing.

Still, I feel director Julien Avery made a valiant effort even if the final product was a little lukewarm. Even though it did feel a bit unoriginal and underdone, I didn’t hate watching OVERLORD so I can’t say I was completely disappointed.

I give OVERLORD 3 out of 5 stars. It is available for streaming on Hulu and Netflix.