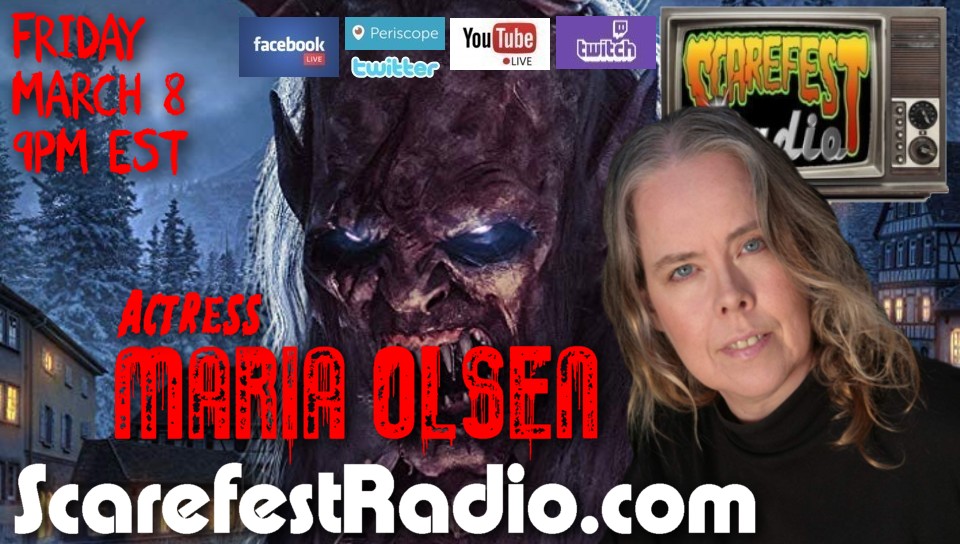 On tonight’s show Wes and co-host Jason Boyd speak to actress and producer Maria Olsen. It can possibly be said that she might be one of the hardest working actresses in the business with over 200 films to her credit and many more on the horizon. This is made even more incredible since she only hit the movie scene in 2005!

Maria’s career began at the early age of 6 performing in plays and dance shows then moved to theater throughout East London and South Africa before finally migrating to the States to begin her journey into film. Primarily know for horror, she has also appeared in a broad spectrum of movie genres including fantasy, scifi, and even a Western. Her pure dedication to acting truly highlights her strong work ethic. She’s like the Energizer Bunny! Along the way, she talks about her love of physical acting (non-dialogue roles), how she has overcome the lack of roles for older woman in the movie industry, and why the love of the acting craft should be a person’s prime motivating force to enter the occupation. She also mentions that her Facebook fan page has albums for each of her multitude of movies that include links on where to watch them. Wow, that’s just incredible fan service.

But Maria is not just an actress. She is also a producer, owning her own production company, Monsterworks66. She did production up until 2015, when she decided to take a break to give herself some downtime. She also started knitting and has a page where she sells her creations. Little known fact, Maria used to be a bankruptcy trustee for PriceWaterhouseCooper, one of the largest professional services firms in the world.

We also see the emotional damage that an unwanted Windows update does to Wes. These things can leave scars for years. We also wonder just how many recycled corpse parts it takes to keep Jason Boyd running at 100%.