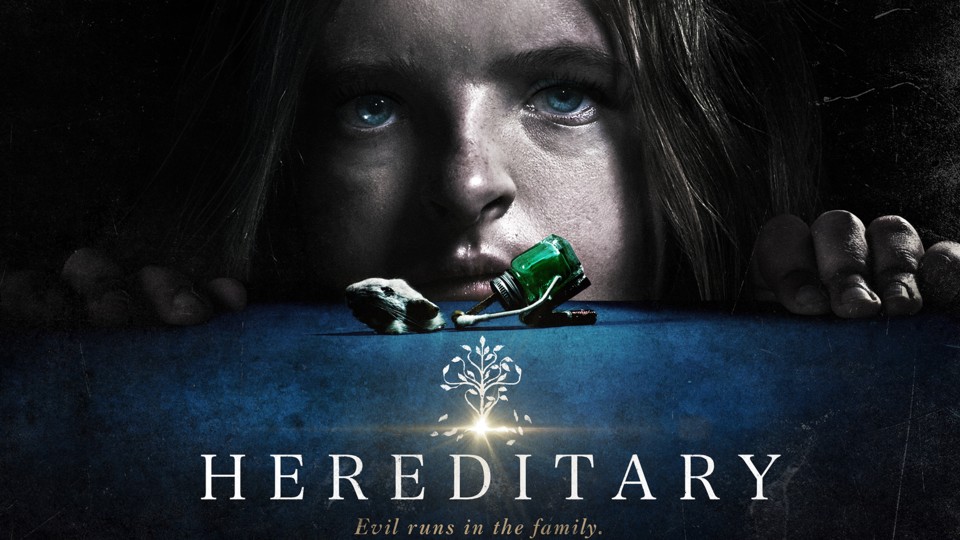 Hereditary is a rare breed of horror movie, in that it is not only genuinely chilling but it also received an enormous amount of critical praise. It was nominated for multiple awards at several award events including the Chicago Film Critics Association Awards, the Gotham Awards, and The Los Angeles Film Critic Awards. It even managed to score several wins, among them Best Director and Best Screenplay, at the 2019 Fangoria Chainsaw Awards. What makes these wins more impressive is that Hereditary is writer/director Ari Aster’s first feature film.

Hereditary boasts a small but incredible central cast. Toni Collette, best known as the mother from the “Sixth Sense” is outstanding as the mother Annie. Gabriel Byrne plays her long suffering husband Steve. Rounding out the main cast is Nickelodeon alum Alex Wolff as son Peter and Milly Shapiro as daughter Charlie.

The story focuses on Annie, a miniature artist, suffering the recent lost of her eccentric, distant mother. As the story unfolds, it is shown Annie is troubled by feelings of grief and regret that leaves her emotionally fragile. Her relationship with her husband and children is severely strained. Bizarre events, such as the desecration of the grandmother’s grave and phantom sightings, begin to manifest as the family struggles to accept the recent death. Following a second horrific mishap, the family begins to suspect their hauntings are growing malevolent, causing the fear to grow as the occult disturbances begin to test their sanity and slowly overwhelms them.

What makes Hereditary work so well is the deep sense of dread that Ari Aster builds throughout the movie. The movie starts off in the midst of a funeral, setting a tone of dark but understandable hardship, but the horror grows tangibly as the paranormal elements start to creep in. Aster masterfully builds the supernatural tension in small increments leaving tiny, unnerving breadcrumbs all the way up to an intense finish. The pacing is a slow burn but Aster is able to infuse enough disturbing elements at just the right moments to keep viewers engaged.

There is definitely a “Rosemary’s Baby” or “It Follows” vibe to the pacing. This may not be everyone’s cup of horror movie tea but, trust me, the super intense last 20 minutes are so worth the build up. Unlike many horror movies, there is little exposition. The horror is revealed to the viewer at the same pace as the characters. Having this sense of the unknown really makes the fear feel more genuine, drawing the viewer in deeper. Eventually there is a moment of revelation but it feels less contrived than most horror stories. Keep a watchful eye out, there is a modest amount of foreshadowing that happens throughout the film.

Hereditary is not a gore fest by any means but it does contain a few truly gruesome moments. So, for those horror fans that thrive on blood and guts, Hereditary might be a little on the tame side. Be forewarned, Aster does seem to have a fascination for decapitation.

Everyone gives great performances. Gabriel Byrne is remarkably subdued but you can tell his character’s calm veneer is starting to crack. Both of the children have suffered odd childhoods and the respective actors sell their parts superbly. However, best of all, Toni Collette is outstanding as Annie. As we watch the family unravel, she does an excellent job of portraying a woman already a little frayed at the seams but as further events wear her down, she shines as a woman starting to utterly disintegrate. A few times the raw emotion makes the viewer wonder if she wasn’t always a little crazy.

Ari Aster has a great eye for horror. For his first outing, he has crafted a fantastic film. It truly stuck with me after the credits finished rolling. It has so many exceptional factors working in it’s favor that many horror movies lack. I think a large portion of this is due to Aster’s strong emotional character building. The horror buried in the tragedy surrounding the death of a distant relative has never been more terrifying.

Hereditary is currently streaming on Amazon.