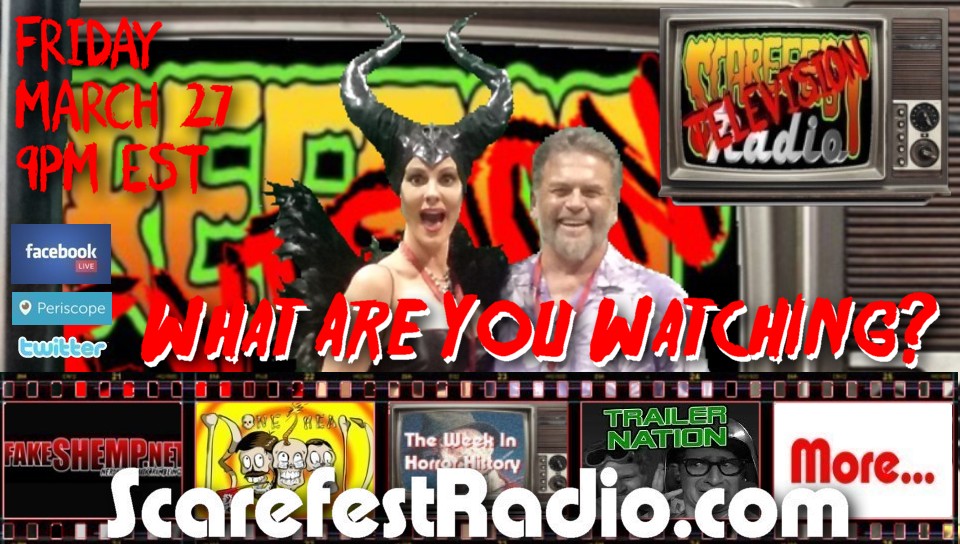 On this week’s show, CC Ann returns to join Wes in another fun departure from the norm in the next in a series of shows that asks the viewers what is on their watchlist radar. Wes and CC field calls from servant of the Elder Evil, Jake Godbold, copywriter Meredith Blackburn, and long time Scarefest alum Scott Wasilewski. The offerings range from the movies of the late Stuart Gordon (RE-ANIMATOR, CASTLE FREAK) to the Netflix film THE PLATFORM to the classic films of days gone by. Along the way the gang discusses the length of movies today, foreign films, and we learn that CC doesn’t have Netflix (the horror!!)

We also get a few more celebrity announcements this week. No spoilers but the Hills will definitely have Eyes at Scarefest this year and a certain empress of the Scream Queens will make an appearance.

Trailer Nation makes a final appearance as well as reviews by Joe Lewis and Glenn Cochrane. Glenn’s offering this week may have even influenced Tobe Hooper’s seminal masterpiece THE TEXAS CHAINSAW MASSACRE. Those Aussie’s are so ahead of the curve.

Finally, we ask, has there ever been a film that accurately depicted the hoarding of toilet paper during an apocalypse and where does one find a WOLF COP?