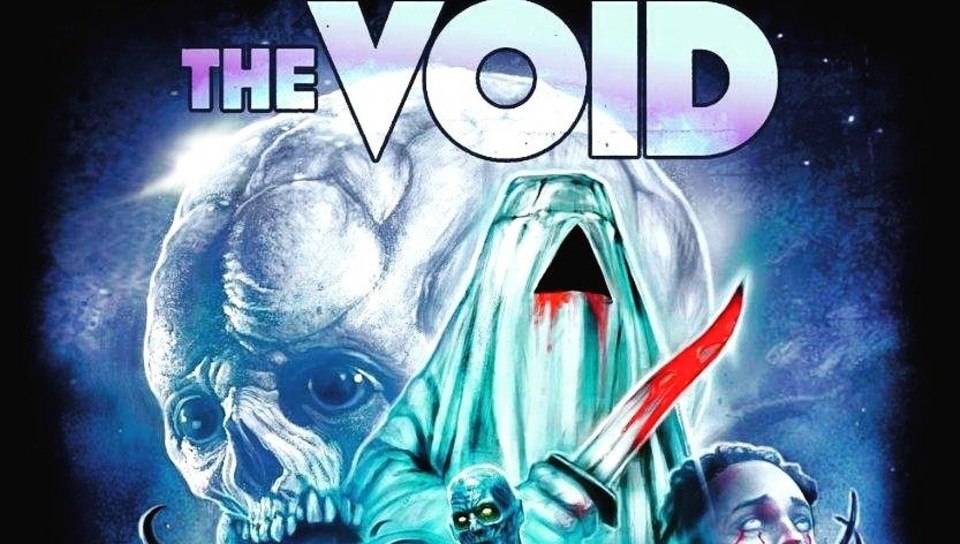 The Void is a Canadian supernatural horror film that came to my attention on the recommendation of a friend that knows about my nostalgic appreciation of 80’s horror movies, especially the works of John Carpenter. Upon viewing, I now see the comparisons to Carpenter’s work in many facets of the film. It felt a bit like the writers/directors of The Void, Steven Kostanski and Jeremy Gillispie, had filmed a love letter to some of the horror elements of the 80’s and early 90’s, mixing in a dash of Carpenter with a smidge of Clive Barker and a pinch of David Cronenberg.

The plot revolves around a group of people trapped inside a rural hospital by a horde of white hooded, knife wielding cultists as a sinister, otherworldly horror awakens in the basement below them. One can see the parallels to Carpenter right there (“Prince of Darkness”).

The movie opens with a pair of vigilantes stalking a hysterical man from a farmhouse. The hysterical man is found crawling along the road by police officer Dan Carter (Poole) who rushes him to the closest source of medical assistance, which just happens to be a small hospital that is in the process of closing due to a prior fire. There, Carter turns over the man to the doctor and few nurses remaining on duty just as the eerie hooded cultists arrive trapping them inside along with a few other patients. The horror builds when the communications go out and one of hospital residents transforms into a grotesque, tentacled monster just as the vigilantes from the beginning show up. Now the small group must face the growing terror the night has in store. Earlier in the film a character states that you are statistically more likely to die in a hospital than anywhere else and, guess what, she’s spot on. Along the way, we find out Dan has weird, apocalyptic visions and has a history with one of the nurses, Allison (Munroe), which results in a journey into the nightmarish basement of the hospital when she is captured by the cult leader.

It takes the better part of the movie before it really finds it’s footing but the last 30 minutes it really pays off. As the film progresses, we start to see a homage to horror writer H.P. Lovecraft. There is talk of an evil power that is beyond understanding and was ancient before time began. The cult leader seeks to overcome death through this ancient power. Themes of death and loss fuel both the protagonist and antagonist and hints of madness lurk right beneath the surface. Lovecraft also surfaces in the appearance of the creatures, all tangled masses of tendrils and glistening, slimy flesh.

One of the factors that really made The Void stand out from most modern films, and what prompted the recommendation from my friend, was that almost all of the effects were practical effects. You can really see the influence of the 80’s here. Some of the monster effects are absolutely revolting. Deliciously revolting and visceral. Many viewers will feel the strong influences of the “The Thing” and “Hellraiser” as well as the body horror of Cronenberg at play here. There are a few places where non-practical effects appear, mostly to create the otherworldly visions, but they weren’t the front and center of this film like a lot of modern films.

The gore is pretty liberal, but not overabundant, so those that are a little squeamish might have to hide their eyes a few times. My only minor qualm is there were a few points where the blood effects were a tad inconsistent. In a handful of scenes there was this odd colored spaghetti sauce appearance to the blood that just didn’t match with all of the other fantastically presented gore in the rest of the movie. Maybe a nostalgic nod to the effects of yesteryear? Nevertheless, it was great to see of the fantastic practical work done on this movie.

Overall the movie was fairly strong. The acting was modestly good, though a few of the characters fell a bit flat but that may have been more of the fact they were secondary characters and was no fault of the actors. It has a dark, brooding look that lends itself well to the story as opposed to a glossy, polished look that would detract from the rural setting. To my delight, the music was an ambient score that reminded me of the cheesy synth themes of the late 80’s films. Like a Lovecraft story, there many elements that aren’t spelled out to the viewer that left the movie open to interpretation such as why was Dan even having visions (is he special?) or what do all of the black triangles seen throughout the movie really mean. I will give big kudos to the characters, especially Dan, as they face all of this eldritch horror like champs for the most part. If I saw what they saw, I would have soiled myself.

I feel like fans of classic horror movies will enjoy this film. Even though it takes a good while to really get going, the horrifying creatures in the basement alone are worth the viewing. The cult leaders monologues on the cycles of life and death near the end are chilling, sounding like they were pulled straight from the mind of Lovecraft, and the reason he decides to try the transition beyond death, even at the horrifying price it exacts, gives an interesting layer to his character. The themes of isolation, tragic loss, transformation, and sacrifice help make this movie stand a little above other indie films I’ve seen. Plus it’s been a while since I’ve seen a horror movie that hasn’t relied on jump scares to make them feel like “legit” horror movies and The Void is virtually jump scare free. That was refreshing.

The Void is currently playing on Netflix.