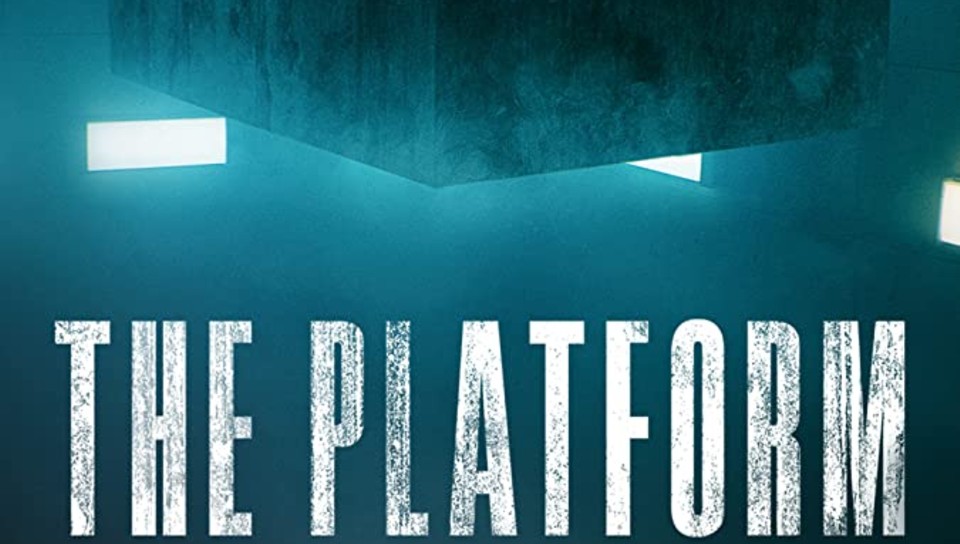 THE PLATFORM (EL HOYO) appeared in my viewing suggestions on Netflix recently and I’ve begun to ponder what kind of algorithms they use to determine these suggestions. Sure, the movie has horror elements, so I see a connection, but after watching, I think Netflix was just looking to add another movie to my slowly growing list of “WTF does this ending mean?” movies.

Is it a bad movie? Not necessarily but I feel like its appeal is definitely more in the cult movie ballpark than something that would be appreciated by the mainstream movie viewer.

THE PLATFORM is Spanish film, but is dubbed for those not a fan of subtitles. It’s hard to peg it to one category as it has traces of horror, sci fi, and psychological thriller blended into it. What made it stand out to me, is that it is what I’d call a high concept horror movie. It’s not scaring you with supernatural boogiemen or serial killers but instead uses more abstract horror.

THE PLATFORM is set in an odd prison-like facility (The Hole) that descends underground an unknown number of levels. Each level has two residents. Once per day a platform filled with food is sent down to feed the prisoners. There are no limits on how much anyone can eat but they only get a few minutes to do so. As each level eats their fill, the lower levels get less and less until there is nothing left. You can imagine how that affects those on the lower levels.

To make matters more interesting, the prisoners are gassed each month then moved to a different, random level. Sometimes they move up, sometimes they move down. One month a prisoner could be eating well and the next they could be getting nothing. With two people in a cell level, you can see where this could lead to some brutal solutions when a person gets hungry enough.

The Hole also has some wild rules. There are no rules against committing violence against a cell mate. Prisoners are allowed to bring one item of their choice, this includes weapons. Prisoners are not allowed to hoard food from the Platform. If they try, the room temperature is adjusted to a lethal level, which will kill both residents.

The movie follows a new prisoner, Goreng, as he spends several months moving up and down through the Hole’s levels trying to survive and interacting with several different cellmates. It doesn’t take long before Goreng realizes how much horror truly exists in the Hole as he ponders the Hole’s hidden meanings.

This is where the high concept horror comes in. The movie isn’t subtle about what it is representing. It’s a pretty straightforward commentary on the “Haves” versus the “Have Nots” and how those in higher social ranks take all the resources, leaving those below them to fight and kill over the scraps or get left with nothing at all. It’s a reflection of our world taken to literal, visceral extremes.

That being said, it is a little cerebral for a horror film. There is a LOT of talking in this movie. Discussions of human nature, what extremes people will go to survive, and how an unforgiving system can or cannot be changed take up about 75% of the movie. I think that could kill the appeal for many folks.

However, on the other side, there is a vicious brutality to the violence in the film. Cannibalism rears its ugly head several times and the gore involved is unflinching. There are later moments when Goreng decides that violence might be only the only solution to breaking the lopsided cycle of food distribution resulting in some surprisingly sadist interactions with his fellow prisoners.

Not knowing the Spanish cast, it’s hard for me to gauge overall performances but for the most part the acting was decently good but the performances sometimes seemed a little stiff. I will give some praise to Ivan Massague, who played Goreng. He gave a great character arc. You could physically see his degeneration as movie unfolded.

My one issue was the ending. (I finally came back to that). Up to that point the movie seemed very literal and grounded but the ending seemed like it started to veer into a more metaphysical area and that just didn’t seem to fit the rest of the movie. Then again, I’m not the brightest bulb so maybe I just misinterpreted what the director was going for.

Ultimately, THE PLATFORM is a horror/sci fi movie that is thick with social commentary that might not be everyone’s choice of viewing pleasures. There are moments when the movie drags and the dialogue gets too clunky but all in all, it is a surprisingly well-done movie.

THE PLATFORM is currently showing on Netflix.