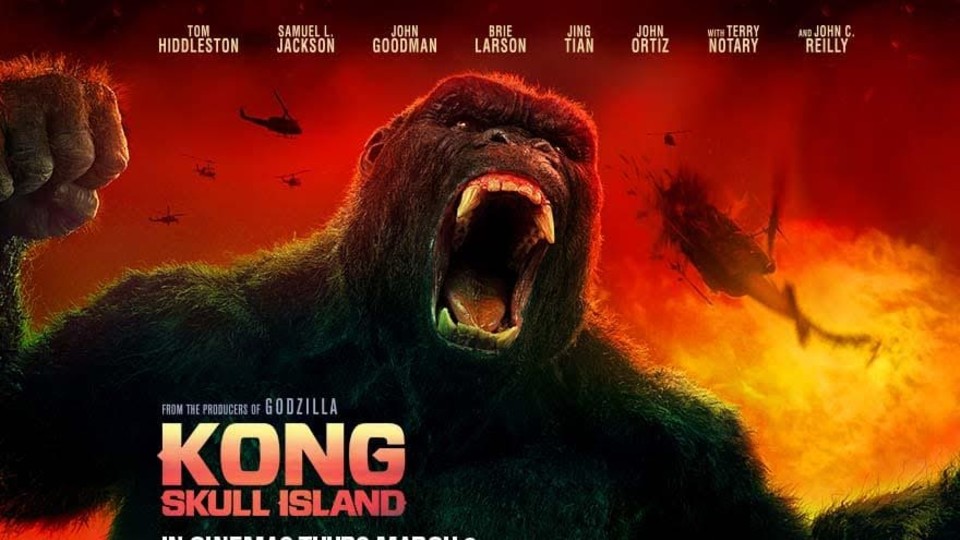 Movie Review by Wes Forsythe
Who doesn’t love a good monster movie? For me, Kong: Skull island was a fun ride. Honestly, I didn’t know what to expect. So often remakes of monster movies go too far out of their way to sexy up the monster and stray too far from the original concept. Skull island gave us just enough nostalgia while updating the story enough to create a separate mythos and tell us a new story with a familiar character.
I knew they were going to try to take us someplace new just by the opening scenes. The movie begins with what could best be described as a brief history lesson of some of the uglier aspects of our society.
I might have fanboyed a little over the cast. I mean how can you go wrong with Nick Fury, Loki, and Captain Marvel in the cast? OK, I will admit the actual characters introduced to us felt a little cliche or at least a little too familiar based on previous King Kong movies. I was all geared up for the same old movie set in a new time period. Alas the recycled characters deployed in the rebooted story worked out pretty nicely in my opinion.
My favorite scene? Actually it was one moment in the worst thought out scene of the movie. I loved the flying palm tree. Unfortunately that scene, that sets up the backdrop for the rest of the movie involves a whole bunch of military helicopters getting their asses handed to them by Kong. I understand the need for the scene. Unfortunately that scene requires you to believe that the first thing a military helicopter pilot does after watching a giant ape destroy another helicopter is to fly really close to the giant ape also. I mean, yeah, he caught the first couple off guard, and a couple where trying to shoot at him, but most of the others just seemed to have a death wish. STOP FLYING SO CLOSE TO THE GIANT MONKEY, FOR GOD’S SAKE!
I fear our military is ill equipped for giant gorilla confrontations. Is it too late to say “spoiler alert”?
I also like the giant cows. Who doesn’t like a giant cow?
But the dinosaur/giant death lizards from hell? Not so much. They really didn’t fit in biologically to our world and therefore felt (and looked) very unnatural. Why they felt the need to deviate from the traditional T-Rex or similar prehistoric death dealer model escapes me. They just didn’t look familiar enough for me to be engaged by them. Sometimes being original for the sake of being original does not work.
But despite its flaws, I recommend it if you like monster movies. Or movies where shit gets blown up, alot. It has a story that is easy enough to understand and follow and enough likable characters to bring you into the story. The writing is crisp and the dialogue is fun.
And you can’t have a movie with Nick Fury, Loki, and Captain Marvel without a scene after the credits. Be sure to wait for it
Kong: Skull Island is available on DVD.
Categories: Movie Reviews
| Tags: monsters