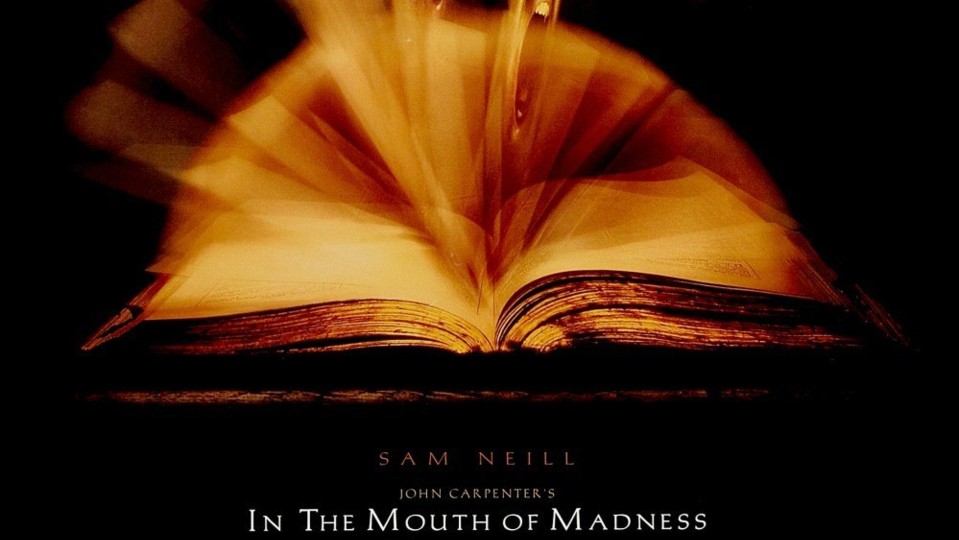 I’ve recently been revisiting a few of my favorite horror movies of the past. Love them or loathe them, I’ve always felt drawn to John Carpenter’s movies. IN THE MOUTH OF MADNESS is one of my favorite John Carpenter classics. I felt like the movie was underappreciated and that it deserved a review to share it’s mind bending glory with everyone.

First off, IN THE MOUTH OF MADNESS boasts a great lead in Sam Neill. Neill is a tremendous actor who has appeared in numerous projects but is probably best known as Dr. Alan Grant in the JURASSIC PARK movies though he has had other forays into horror such as the OMEN III: THE FINAL CONFLICT and the scifi/horror flick EVENT HORIZON. Neill truly sells his character as first a smarmy investigator then a horrified participant in a nightmare of insanity.

The movie tells the tale of John Trent (Neill), a prickish insurance fraud investigator that is called in by Arcane Publishing to investigate the disappearance of their prize horror author Sutter Cane (Jurgen Prochnow). If he can’t find Cane, they want Cane’s draft of his final book. Just prior to this meeting Trent is almost killed by an ax wielding maniac asking him about Cane. Thinking the disappearance is some form of publicity hoax, he takes the case and starts an investigation that leads him to a town that isn’t supposed to exist. There he faces the truth about Cane’s writings and learns he’s trapped in a horror story that he can’t stopping living in.

The movie is heavily influenced by the writings of H.P. Lovecraft. Elements of his stories such as the fear of insanity and eldritch horrors lurking at the threshold of our world waiting to devour us, are scattered throughout the the movie. Some of quotes frm Cane’s books are actually quotes frm Lovecraft’s writings. There is also that raw old world mysticism that seems to seep through in stories set in New England, a place where ghost stories seem to have planted their first primal roots in America.

What really seems to make the film work on an unnerving level is that there is this wild metafictional theme about what makes up reality. The characters debate a few times about what constitutes sanity versus insanity and what would happen if those notions reversed themselves. This gives the supernatural horrors that appear afterward such a freakish tone. Is Trent insane or are these things he’s experiencing truly happening?

Although the film really hasn’t aged that well in the era of highly evolved special effects, the practical effects are a huge part of the appeal of this movie. The monsters have a presence that feels far more grounded than fancy CGI. There is one transformation effect that did come across fairly hokey that doesn’t quite capture the full horror of what it’s supposed to convey but it’s still kind of disturbing . Plus, there are creepy children involved. Those are always good.

The movie may not be everyone’s cup of tea. It is surprisingly light on gore. It is a little cerebral, with all of it’s talk about reality versus fiction and the blurred lines in-between, and it does build a pretty bleak story about the end of the world. However, even though it could have done so much more with it’s great premise, the movie does a commendable job of bringing a different type of horror story to the screen.

Although the movie didn’t do so well at the box office, it has gone on to acquire a respectable cult status. I believe it is one of John Carpenter’s overlooked gems and one of the best homages to Lovecraft’s mythos. Definitely not as good as THE THING or HALLOWEEN but stands right up there with PRINCE OF DARKNESS.

If nothing else, you’ll remember the phrase “DO YOU READ SUTTER CANE?”

You can find IN THE MOUTH OF MADNESS for rent on Vudu and Amazon.