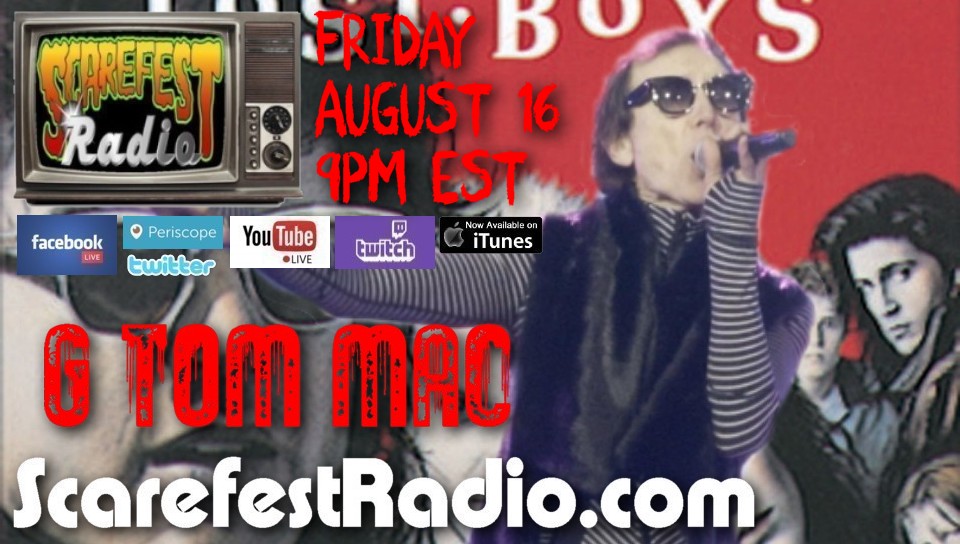 Where else would you hear an interview that includes vampires and Broadway musicals? Look no further as this week Wes and co-host Chris Sutton speak to singer, songwriter, and composer G Tom Mac. Though he might be best known for his goth rock masterpiece “Cry Little Sister” from the classic vampire movie THE LOST BOYS, G Tom Mac has done a considerable amount of music for numerous TV and film projects, working with Hollywood names like Cameron Crowe, Jerry Bruckheimer, and Joel Schumacher.

G, as he’s called by Roger Daltrey, discusses his upcoming appearance at Scarefest XII and his new Broadway musical “A Lost Boy Story”, a project over 4 years in the making. Along the way he gives us insight into his passion for music and his creative process for writing the musical’s songs and story, which expands beyond the film. For additional information and updates on the musical check out the Facebook page facebook.com/ALostBoysStory/

We also get 5 new celebrity announcements. Not to spoil them all but there are some big names like Katherine Kamhi (SLEEPAWAY CAMP) and Thom Matthews (FRIDAY THE 13th VI, RETURN OF THE LIVING DEAD). Wes also announces the featured movies for the Film Festival this year, chosen from 99 entries. Yep, 99 entries! It’s a big year for movies.