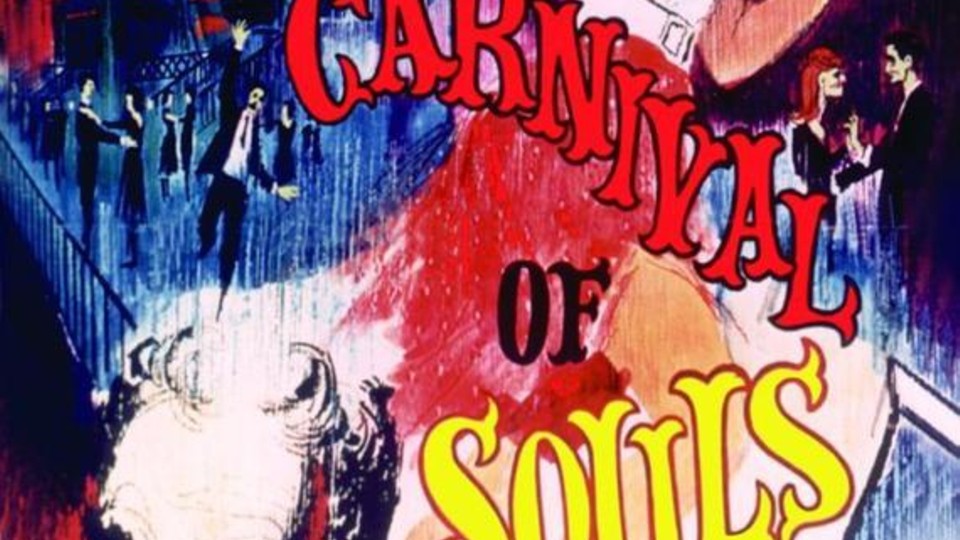 CARNIVAL OF SOULS is either an intentionally layered and meaningful film, or it was a ‘happy accident’ by Herk Harvey. I sometimes say it’s not too far removed from an Ed Wood film, but that’s really not fair at all. There’s something special about this movie, and I’ll be darned if I can really put my finger on it.

Seriously, it’s got so much going against it: an unknown cast, a low budget, shoddy sound effects work, poor makeup effects on the ghoulish characters, a musical score that’s played entirely on a pipe organ. It’s in black and white, the acting performances are only barely acceptable and are on par with TV shows of the day. It’s filmed on location in Kansas in the early 60’s…

The movie has resonance, and there’s so much about it to ponder, and speculate about. It’s a lot of fun to dissect.

I can’t really explain WHY it’s one of my pet movies, but I can’t deny that it is, either.

When THE MISSION came out, I went to the theater to see it, and was fascinated by a sequence at the end where there was a fairly silent and practically slow motion death scene from multiple angles. I started getting the idea in my head that I’d like to one day put together a documentary of silent sequences from films where people were shown dying…maybe as part of a larger discussion about cinematic film representations of death, and the afterlife, etc.

I never got around to it.

The closest I ever got to even doing a compilation video of the sort was when I tried to make my own music video for the old song RED RIGHT HAND, showcasing scenes from movies where I knew actors held up their right palms, and they were covered in blood (there’s scenes of this sort in the original theatrical cut of DUNE, and in BLOOD SIMPLE, and several others – I was surprised, really, when I found them all).

Anyway, for me, CARNIVAL OF SOULS seems like a meditation on death. I’m not real sure of it’s religious implications, because it straddles the fence when it comes to whatever its theological position might be, but being made in the early 60’s, it shouldn’t be too hard to guess where the writer was coming from.

Essentially, the character of Mary has died and gone to hell at the start of the film and, somehow, she’s escaped back to our reality – which is a world in which she does not belong. She slips in and out of this reality and, well, I guess I can only call it a hell dimension, throughout the entire film, but the problem with this concept is that we’re never really given a good reason why she deserved to go to hell.

I wish we’d been offered up more clues than what the dialogue reveals: She’s a strong-willed person, she doesn’t really care for the company of others (this makes no sense, since she dies in a drag race accident, seated by – seemingly – two of her girl friends; if she didn’t like the company of others, why was she in the drag race in the first place. Granted, she did seem a bit uncomfortable to be in the predicament as the film starts).

She also views her church work as nothing more than a business, and merely a ‘job’ (this, too, is contradicted when the preacher fires her, and she is so obviously devastated). I wish we’d seen her actually playing the organ during a worship service in the film – but what the film doesn’t show, and what the film leaves us to ponder, is one of the largest parts of its appeal for me.

The remake turns all the mystery of this original on its ear; the ghostly man is transformed into the man who molests the female lead from the time she was a small child, and is even shown having killed her mother…the ghosts become angels (she even has sex with an angel in the film, which is mega weird), and the fact of the matter is, as much as the original film succeeds – even in its cheapness – the remake fails on all counts, and was effectively a waste of celluloid.

There’s a richer, deeper, and more complex story at work in the original that’s, somehow, left perculating in my brain. It’s one of those B-movies that I watch and think, “I appreciate what they did, but – somehow – there should be more…” – It’s one of those movies that leaves me pondering how it could be improved while maintaining my admiration for how it succeeds in spite of itself. It’s a film to be admired.

Many have noted that, since it preceded NIGHT OF THE LIVING DEAD, it’s possible that George A. Romero was inspired by it. I have no idea in the world whether or not this is true. But I do know that, the first time I saw this film, like the first time I saw NIGHT OF THE LIVING DEAD, I almost found it laughable…until later that night…when I was all alone…and was afraid to look out the window. I didn’t want to see the pale face of the ghostly man in the film looking back at me, and really didn’t want to take the chance that I might. To me, that was a marker that the movie was a little bit better than I initially thought.

I think it would be fair to call it a ghost story. Mary is a ghost in the film – for all intents and purposes – only, she isn’t aware of it until the final segment of the movie – and neither are we.

I love how the movie ends with her footprints trailing off into nothingness. Fortunately, CARNIVAL OF SOULS didn’t – and its following grows with each passing year.