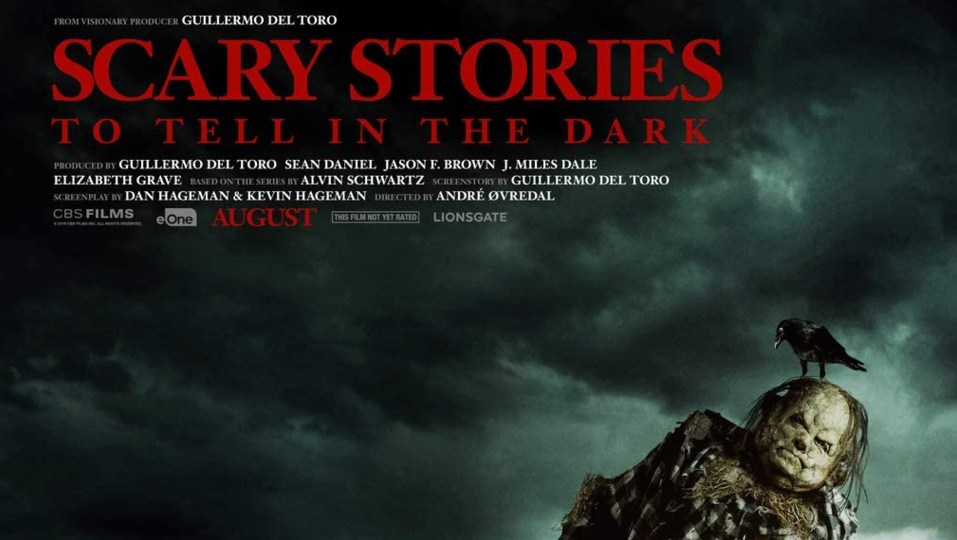 Full disclosure, this review was motivated entirely by nostalgia. Not that this movie is an older movie but its original source material is well over 30 years old. It is that source material that is basis of the nostalgia. Strap in, we are taking a walk down memory lane.

The movie is based heavily on a trilogy of children’s short horror story collections written by Alvin Schwartz, two published in the early 80s with the third book appearing in 1991. Each book was a compilation of spooky stories drawn from urban legends and old folklore. What made these books really shine were the utterly terrifying illustrations by a man named Stephen Gammell. Some of them were so unnerving.

I discovered the first two books at a school Book Fair when I was 10 years old and they were a huge building block in forming my fandom of ghost stories and all things spooky. I have always wanted to see these storied visualized on screen.

The film does exactly that. It takes several of the best stories from these books and brings them to impressive life, tied to a framing story set in a small town in the late 1960s. Keep in mind these were children’s books so the horror is still largely family friendly, yet still finds a way to stay slightly disturbing.

The film focuses on a group of small town teens that decide to explore a local urban legend, a house haunted by the ghost of Sarah Bellows, a ghoulish girl that told horror stories and was connected to a wave of child disappearances. There they find Sarah’s book of scary stories and, of course, they take the book. Shortly afterward, the book begins writing new horror stories that include the teens, along with several other kids, causing the victims of the stories to live them out in reality. The surviving teens now have to solve the mystery of Sarah’s storybook or die.

Sounds terrifying, right? If bestowed an R rating, this could have been truly horrific. The concept is there but the filmmakers did decide to appeal to the broader audience with a PG-13 rating, so the gore is practically non-existent and the terror falls a little flat.

Does this mean the movie isn’t scary? For the most part, yes. The scares are tame in comparison to more adult fare. The filmmakers tried to stay true to the ghastly illustrations in the books and the monsters do have a certain eerie vibe but they fall just short of being frightening. The closest they come to truly frightening is Harold, the scarecrow. Well, at least he gave me the willies.

Again, the movie is based off kids’ books so viewers shouldn’t expect the EXORCIST or EVIL DEAD going into it. It does contain some surprisingly sinister elements layered into it such as involuntary cannibalism and child abduction but for the most part, it reminds me of the current supernatural themed network television shows like SUPERNATURAL and SABRINA.

Just to think, these books were considered scandalous and inappropriate for children by many parent and social groups back when they first gained popularity and now I’m referring to the movie based on those stories as tame. Wow, things really change.

Is the movie bad? Not at all. It is beautifully shot and the acting is relatively good considering many of the main characters are all moderately unknown actors. The monster effects do come off a tad too CGI but they’re certainly better some of those godawful effects in those SciFi channel original movies (I’m looking at you SHARKNADO series!!)

Some people may be excited because Guillermo del Toro’s name was attached to this project but he is only a producer on the film but you can see his influence in the film’s style. The director was Andre Ovredal. If you would like to see another, more haunting film by Ovredal, check out a movie called THE AUTOPSY OF JANE DOE made in 2016.

The great thing about this movie is that you can share this movie with the kids. Maybe not young children but teens should find SCARY STORIES TO TELL IN THE DARK a good spooky flick. Plus all of us 80s and 90s kids get see some of our classic stories like “The Red Spot”, “Harold”, “Me Tie Dought-ty Walker”, and “The Big Toe” come to grisly life.

Overall, I’d give the movie a 3 out of 5 but the nostalgia kid in me wants to rank it higher, like 5 out of 5, but we all know always seem cooler when we were kids.