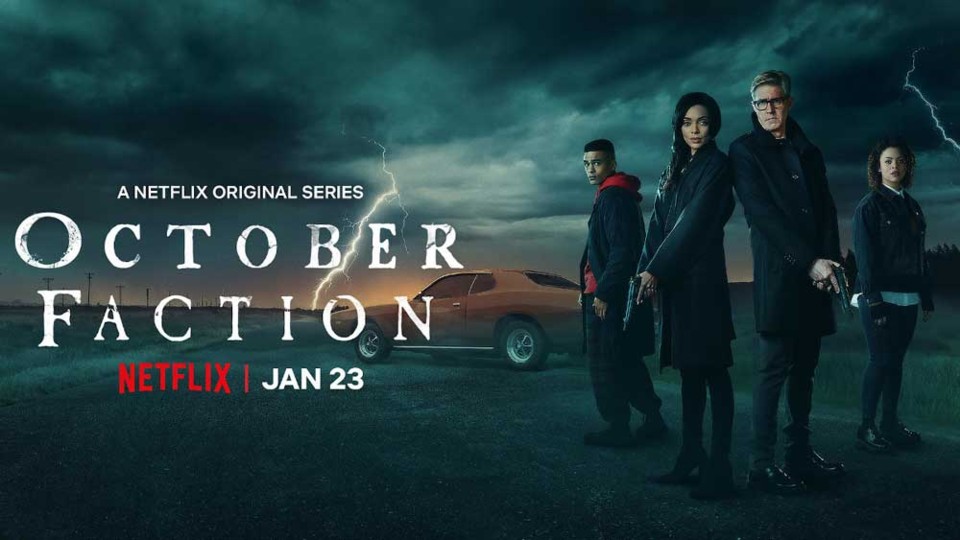 A recent entry into Netlix’s horror genre almost slipped under my radar. Let’s face it, October Faction sounds more like a spy thriller than psychologically driven horror series set against the backdrop of monster hunting.

And speaking of the title – having never read the comic book – what the hell does the title even mean? I mean I caught a reference to monster activity always kicking up a notch in October, but that was it.

I’ve gotten into this cycle where I enjoy Netflix produced series and then find them terribly unsatisfying after I am done.

Don’t get me wrong. I liked the first season that is out now. I binge watched the entire thing in a couple of nights. It was fast paced with plenty of action and a storyline that kept your interest even if it was a little harder to follow once in a while. It had a quality that made me want to know what was going to happen next despite whether I liked what had just happened.

And I am going to throw them a big compliment on employing the largest number of “everyman” actors ever in the history of television. Everyone in this series looks like someone you know from your bowling team. We see all (well most) body types and the facial wrinkles and imperfections looked so very comfortable. I do not mean this as an insult. The casting choices made the cast feel very familiar and allowed me to concentrate on the story being told. The only supermodel looking cast member that I noticed was the gay teenage son (played by Gabriel Darku) and I am assuming that was because “hot and gay” is the new “scantily dressed”.

The storyline: A perfectly average married couple (J.C. MacKenzie and Tamara Taylor) are undercover operatives for a secret agency, The Presidio, that hunts monsters such as vampires and werewolves and the like. Think “Grimm” or “Supernatural” but with government subsidies. They have teenage twins (Darku and Aurora Burghart) who it turns out have special abilities and the fun ensues.

The storyline is kept interesting by twisting it into surprising directions every chance they get. Although some are telegraphed, the only obvious one to me was that I could tell right away that Presidio did not have everyone’s best interest at heart. Maybe it’s because big, secret, well funded agencies never turn out well.

My biggest criticism of the series is that a couple of times they tried a little too hard to make the technology look high tech. There is no purpose in that video game looking overlay on the computers. We all know what computers look like. We have settled into a pattern. Even Linux looks like a Mac now. We all got pissed when Windows tried to push tiles down our throats. Flashy onscreen file graphics that belong in 1995’s “The Net” are no longer impressing us.

But, as I mentioned before, we get left with a lot of unanswered questions. And even worse: MOST OF THOSE QUESTIONS POP UP IN THE LAST DAMNED EPISODE! What the hell did the warlocks do anyway? Is that bitch lady dead or not? I’m not even sure a couple of the questions will be answered. Several times through the series, scenes felt left out or at least truncated.

Oh, and it is FUNNY! Not stupid funny either. Smart funny with very human responses. The dialogue is on point.

I am going to give it a thumbs up (or 3 out of 5 cigarettes as Glenn Cochrane thinks I should rate these things). If it takes an outstanding horror story to hold your interest, you probably won’t like it. If you don’t mind giving the story a little time to gel, then October Faction may just appeal to the horror fan in you.