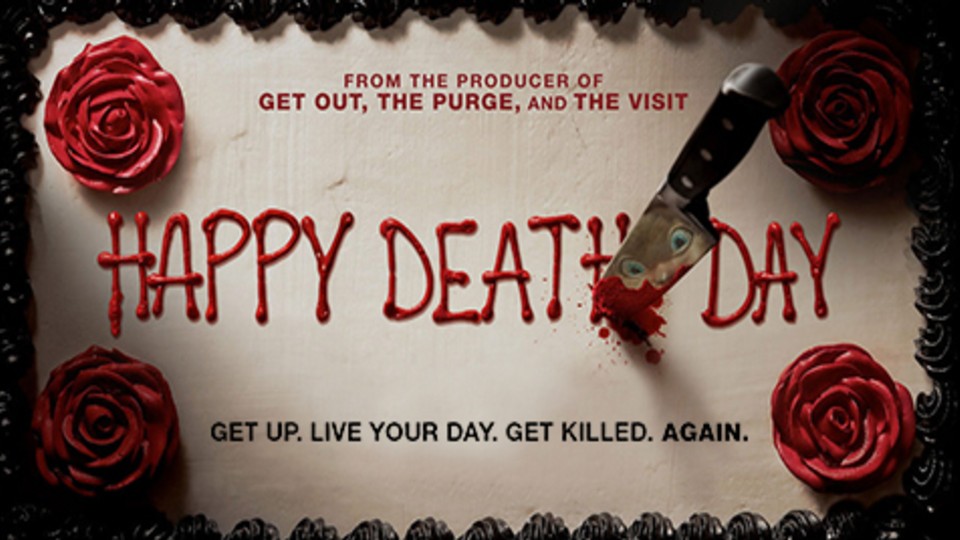 First off, this is a novelty horror movie. You know the kind. Those horror movie that has been fused with another genre to make it stand out from the average horror movie. Why just make a regular old slasher movie when you can add the element of science fiction? And that thought gave birth to HAPPY DEATH DAY.

It is essentially, what would happen if the Final Girl in a FRIDAY THE 13th movie got caught up in GROUNDHOG DAY. Too much? Maybe, but the idea has a little promise, right?

The movie tells the story of Tree Gelbman (Jessica Rothe), a sorority girl who wakes up after a night out partying that soon discovers a killer in a baby mask is stalking her. Even worse, after the killer manages to murder her, she keeps waking up to relive the day repeatedly. Tree decides to find a way to stop the Babyface killer, hoping that will break the loop. She sets off to discover the killer’s identity, knowing that every time she dies, she has to start over. To complicate things, she learns all this dying is destroying her body so her time is limited.

Sounds wacky, right? It is. No two ways about it. There is a certain dark humor in seeing Tree get killed in various different ways along her path to Babyface’s identity. At times, the movie does play the humor out for laughs, at other times they play up the tension and horror.

That’s what may drive some people away from this movie, the humor. The comic elements sometimes get the results they were shooting for and other times, they fall a little flat. Personally, I thought the movie was made as a fun homage to both the horror and sci-fi genres. Like SCREAM, it was self-aware enough that it could poke fun at itself but still tell a passable horror story.

I know time loop movies can go either way. They can be entertaining or they can be a crapshow. It depends on how they are done and I think HAPPY DEATH DAY was fairly clever with the concept. Here it was used as a way for Tree to discover the secret of the killer’s identity, while still giving us a body count, even if the body is the same person in multiple cycles of that same day.

Plus there are a few other bodies scattered in there. We couldn’t just have Tree be only the victim.

The movie is gore light. It was released as PG-13, the unfortunate rating used to give a horror movie a broader viewing audience, which takes away the possibility of having any heavy violence. The violence is dialed back to almost TV standards. There are a few stabbings. There are drownings and fatal falls but nothing graphic.

The acting was decently good. Jessica Rothe’s acting was admirable. Like several primary characters in horror movies, there is an element of tragedy in her life. She represses this behind the image of a shallow sorority girl. At first, she seems like the worst but as the movie progresses her character does develop and become more likable. She gets to show a broader range of emotions and, even a little charm, as the day repeats.

My only qualm was once you know the killer’s identity; the story shifts to more of an action tone so the horror kind of peels away. It does have a few moments where it tries to build genuine tension and throws you the unavoidable trope of a jump scare or two. Overall, I think it does a better job of merging genres than a few other novelty films.

Even though time loop stories might be overdone, what it adds to HAPPY DEATH DAY gave the movie a little edge over a traditional horror film. I attribute that to the writer, Scott Lobdell. Lobdell is an accomplished comic book writer, probably best known for his run on various X-men comics for over a decade. This also explains the more developed character arc and storytelling compared to most cookie cutter horror movies.

Is it a great movie? Not necessarily. It’s cheesy and still has a few clichés you’ll see coming from a mile away but, overall it is a fun movie. It wasn’t the best horror movie but I was entertained by it. It is a Blumhouse production and they can be hit or miss. In this case, they made a moderately good gimmick movie that was ultimately successful financially.

I would recommend HAPPY DEATH DAY to anyone just looking to see a fun movie. I would rate it at least 3 out of 5 stars, if a scale is required.